Why the Rich Get Richer? 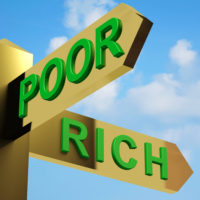 Imagine you found a rich person to take on all your debt in one fell swoop. Presto – it’s gone from your life – and reappears on the books of your rich friend. What would they do with their new debt problem?

You might say, ‘who cares,’ as long as it’s not yours. But the rich are not wealthy by accident because they know how to manage money and how the system works. They look at issues like debt with a different perspective. Perhaps there’s something we can learn by looking at how a wealthy person would manage a debt.

You might think they’d just write a check and be done with it. Heck, they have plenty of money. Right? Chances are that assumption is completely false. The rich are keenly aware that once they write a check, their money is gone. They also know that once money is gone it rarely (if ever) finds its way back home.

Just like you, they want to use OPM – Other People’s Money. So instead of writing a check, they’d go down to the local bank, pledge a portion of their enormous stock portfolio, and borrow money to pay off their debt.

But why would they take on more interest expense when they could just write a check? The answer might not be intuitive, but it is powerful. Writing a check would mean freeing up cash or selling some of their stock to cover the check. That would mean losing the earning power of existing money. Rich people don’t part with assets that have earning potential!

Either way, they pay off debt with future money that has much less earning capacity than existing money.

The key takeaway is that rich people preserve their earning assets at all cost. They make their dollars do two jobs instead of one. In this case they used the power of their portfolio to inexpensively rent money that paid your bill. The money used to secure their loan continued to grow because it never left their account.

But I’m Not Rich

Grasping the concept of having our dollars do two jobs at the same time is foreign for most. We pay off debt with our hard earned money not realizing there is any other way. Since we are not rich, we believe we can’t play the game the ‘rich-person’ way. We don’t know how to make our money do two jobs simultaneously.

That’s what we do at Live Interest Free. We show our clients a way to establish a system that attacks debt in the same way the rich would. This system does not require a huge stock portfolio. You do not have to be independently wealthy. You simply need to be willing to change the way you look at money and debt.

Want to learn how it works – just let us know. We’ll gather a bit of information – and run a debt freedom report for your specific situation – and show you exactly how quickly you can be debt free – and how much money you’ll have when you get there.

See If You Qualify